For language tests, particularly in the case of high-stakes examinations, where the results will have a direct effect on candidates’ education, employment or migration, quality dictates that a test result should offer a reliable description of a learner’s ability. The following, key concepts in this context, direct the test development work of Cambridge English Language Assessment:

The fact that learners progress through levels of language proficiency and require examinations which appropriately reflect this is implicit in the concepts of validity and authenticity, the need to report their achievement at the point of assessment in comprehensible and constructive terms implicit in the concept of impact. Candidates taking an examination set by Cambridge English Language Assessment have seen their results reported in terms of the Common European Framework, in addition to the more traditional grades, since 2001.

The Common European Framework of Reference for Languages: Learning, teaching assessment (CEFR) was created by the Council of Europe as “a common basis for the elaboration of language syllabuses, curriculum guidelines, examinations, textbooks, etc. across Europe” (Council of Europe 2001, 1). It grew out of developments in language education and responded to a need for a common international framework for language learning which would help all stakeholders, from learners and teachers to examining bodies and educational administrators, to situate their work within a wider frame of reference. In terms of the third aspect named in the framework’s full title, assessment, it was hoped that the CEFR would facilitate, among other things, cooperation among educational institutions within Europe, including the mutual recognition of language qualifications. The can-do descriptors of the CEFR now underpin our meta-language for describing learner competence in a foreign language, and the CEFR levels have provided a shared and meaningful framework for setting the goals of our teaching and reporting the outcomes of assessment.

If the CEFR is the overarching framework of reference being used, stakeholders – learners as well as receiving institutions – need to be able to rely not only on the framework itself but also on the alignment of the tests in question to the framework. Test validation and alignment is an ongoing process which requires regular re-evaluation and confirmation that existing alignments continue to hold. The Cambridge English examinations informed the development of the CEFR and have themselves been informed by it, a relationship which is long-standing and well documented. A fuller discussion, covering historical, conceptual and empirical perspectives, with full references and links, can be found at http://www.cambridgeenglish.org/research-and-validation/fitness-for-purpose.

A CEFR level reference allows a candidate’s ability to be mapped, in general terms, onto the can-do statements of the framework. A standardised score (0-100) was added to Cambridge English reporting in 2008, allowing candidates to see more clearly where their performance fell within each CEFR level and exam grade. Since January this year, beginning with Cambridge English: First, Advanced and Proficiency, a score on the Cambridge English Scale replaces the former score system, which represents a further step in this process of refinement (see also UCLES 2014a). As before, candidates can see where their performance falls within each CEFR level and grade, but on a unified scale which is able to report from below A1 up to C2, across the range of examinations (see Fig. 1). In addition to the overall score, the score for each language skill, i.e. Reading, Writing, Listening and Speaking, is given on the candidate’s Statement of Results and certificate. This brings greater clarity and transparency and facilitates easy comparisons between different exams.

In keeping with the ongoing nature of validation mentioned above, alignment studies are in process to evaluate the links between adjacent exams (for example between Cambridge English: First and Cambridge English: Advanced) involving candidates taking both exams. This will ensure the integrity of the scale across the suite of exams, over time, and mean that receiving institutions can be sure that the same score on two different exams represents the same standard of achievement, e.g. 175 gained as a result of taking Cambridge English: First or as a result of taking Cambridge English: Advanced. However, it is important to note that a higher-level exam does cover a broader construct. This means that the candidate for the higher-level exam has demonstrated the same level of performance, but on an exam which is designed to elicit a wider range of cognitive processes and functions. This can be important in contexts where particular functions are needed, for example studying within higher education, and in such contexts both the score and the exam on which the score was achieved should be considered.

Although IELTS, which is jointly owned by British Council, IDP: IELTS Australia, and Cambridge English Language Assessment, will continue to use its signature nine-band scale for reporting results, its alignment to the CEFR and to the Cambridge English Scale has been similarly established by means of empirical investigation (see Fig. 2). In 2009, a comparative study was undertaken to benchmark C1 level as represented by Cambridge English: Advanced against IELTS scores, which is reported in UCLES 2013. A similar comparison study for Cambridge English: First and IELTS is in progress.

The Cambridge English Scale is an enhanced reporting system which enables Cambridge English certificate holders and their receiving organisations to see clearly where their English language performance sits – in terms of the examination which was taken, in terms of the wider system of Cambridge English examinations, and in terms of CEFR. For tertiary institutions as receiving organisations, it is hoped that the Scale will make for greater clarity and ease in the admissions process. Universities can decide on the minimum score which best suits their programme profile (see UCLES 2014b). Separate skills reporting should also help university language centres make more differentiated decisions about the support L2 students may need in order to make the most of the degree programmes to which they have been admitted.

Figure 1
The Cambridge English Scale
From UCLES 2014a 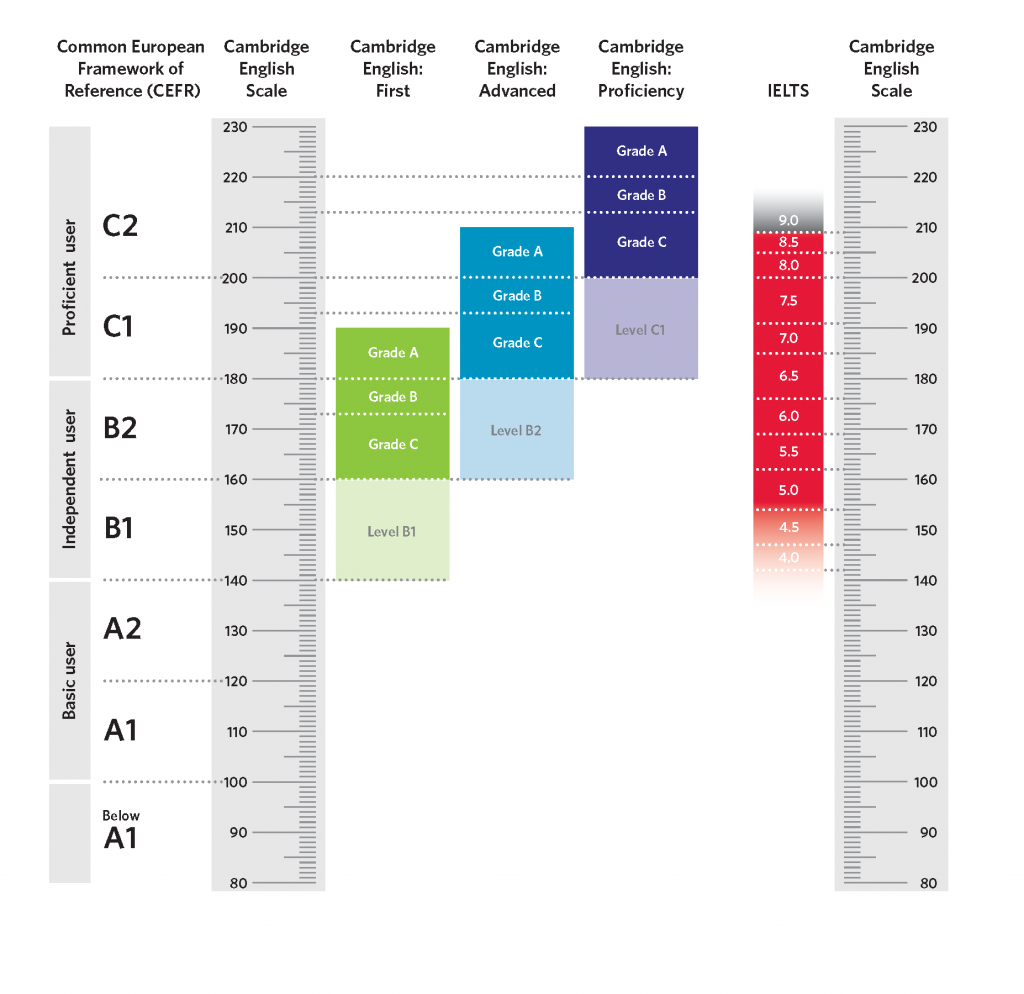 Figure 2
The Cambridge English Scale and IELTS band scores
From: UCLES 2014a 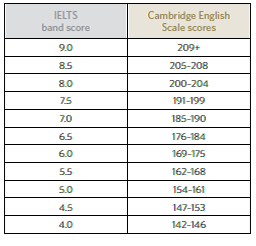