Information and communication technologies play an ever-increasing part in how 21st century students come to understand, experience and shape their relationship to the world. The practice of “task-based language teaching” (TBLT) offers a promising route to harnessing students’ affinity with Web 2.0 technologies as these technologies enable meaningful, multiliterate tasks and at the same, afford unprecedented ways for supporting students, and having them collaborate and interact with each other. This article provides some theoretical perspectives to task design as well as three practical examples of technology-mediated TBLT.

Generation Z students, born in 1995 or later, tend to identify their use of, or even dependency on, technology as the most distinctive feature of their generation (De Morgen 2014; JWT 2012). Research shows that students have adopted technological advances to the extent that they have significantly altered students’ living and learning patterns (Rosen 2010; Ito et al 2009), an evolution which presents higher education with a host of unforetold pedagogic possibilities, but questions too (Nussbaum-Beach & Hall 2012). One such question, especially relevant for teachers of language and communication, is how to address the new (hybrid) genres that have emerged along with new communication technologies and how to teach these new literacies (“multiliteracies”), which typically involve strategic insight into a multimodal rhetoric of communication (Thorne 2013; Cope & Kalantzis 2000; Kress & Van Leeuwen, 1996). Even though the use of digital media is native to contemporary students, it could be argued that (higher) education still has a crucial part to play in affording students reflective insight into the possibilities, methodics and mechanics of these new genres and literacies (Wysocki & Lynch 2007; Anstey & Bull 2006).

One particularly promising avenue for teaching to these new literacy needs is technology-mediated TBLT (Task Based Language Teaching). Over the last decade, TBLT has been gaining a lot of currency as a language teaching approach (Van den Branden, Bygate & Norris 2009; Van den Branden 2006). TBLT could be described as a Dewey-inspired “learning by doing” approach in which students are given a meaningful, challenging and often real-world task that requires language use to complete it. In TBLT, a task is defined as “an activity in which a person engages in order to attain an objective, and which necessitates the use of language” (Van den Branden 2006: p. 4). Because of the task design, the elements of language are reframed within an authentic communicative context, which draws the student out of the traditional repetitive or grammar-translation learning approach and into the domain of active literacy learning.

Task-based teaching, by its very nature, invites the use of new technologies: “Web 2.0 technologies create unprecedented environments in which students can engage in ‘doing things’ through technology-mediated transformation and creation processes rather than just reading about language and culture in textbooks or hearing about them from teachers” (Gonzalez-Lloret & Ortega 2014: p. 3). Yet, it is only since fairly recently that the implementation of technology in TBLT is being addressed and researched in a systematic way (Thomas & Reinders 2010).

‘Doing things’ is, of course, an all too sketchy description of what a good task amounts to. The Center for Language and Education (CLE, KU Leuven) has identified the following TBLT guidelines. Task designers are advised to make sure:

Figure 1 represents the geometry of a powerful learning environment for task-based teaching and learning. 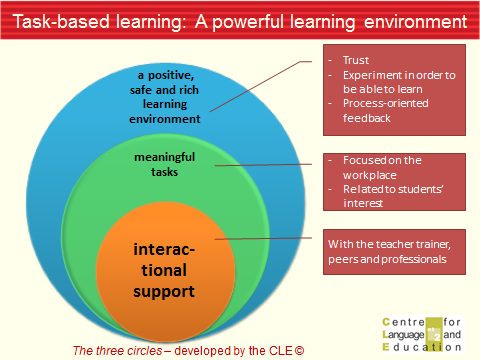 The following three examples aim to demonstrate how information and communication technologies can be implemented to help realize these conditions. The examples are culled from educational development projects in which CLE partnered (OOF-projects funded by KU Leuven) and from personal, educational practice.

Each of these examples hopes to testify to the usefulness of task-based language teaching and to the role that technology can play in the design of the task and the learning environment.

JWT Intelligence (2012). Gen Z: Digital in their DNA. Retrieved from  https://www.jwt.com/en/worldwide/thinking/genzdigitalintheirdna/ on the 20th of October, 2014.

¹ The website can be found here: https://associatie.kuleuven.be/np/beecom/. And this YouTube timelapse video documents a class of students interacting with a prototype of the toolkit: https://www.youtube.com/watch?v=_QLhdUmoZt8.